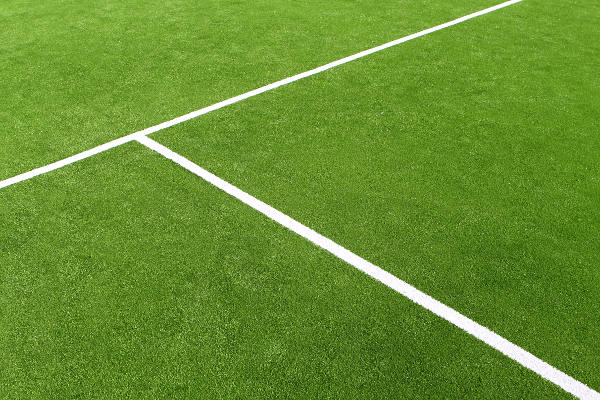 With years of expertise creating beautiful tennis courts for homes, sports centres and schools, Sovereign Sports has plenty of experience not only in building the surface, but also in spraying the markings. Many people enjoy tennis but don’t actually understand the court markings particularly well – specifically they may not understand the difference between a court during a singles or doubles match.

Of course, the vast majority of tennis courts are marked with full doubles. This is the familiar shape of court that you will have seen if you have watched Wimbledon or played on a standard tennis court.

Even though singles tennis is more common (and more popular to watch) there are parts of the painted court that are not used in standard singles tennis. The outermost lines that run lengthways down the edges of the court are referred to specifically as the ‘doubles side-line’ – in singles tennis you can ignore these lines altogether (as well as the small lines connecting the baseline with the doubles side-line).

So, in fact a singles court only makes use of the surface inside the baseline and the singles side-line. You can consider the singles court to only use the interior boxes. To serve a player stands at the base line and has to serve into the corresponding service box. After the serve both players are free to hit the ball anywhere inside the baseline and singles side-lines.

With doubles, players serve the same way – having to serve into the service boxes – but players can then hit into any space within the baseline and the doubles side-line. So, while the overall size of the court is larger for doubles, players have to play within the same serving restrictions as in singles tennis.

Your court can of course be painted only for singles competition, but this is very rare as most owners prefer to have the option for both.